Best-Selling suburbs in South Africa and Where to Buy

The COVID-19 outbreak caused untold detriment to many businesses and pushed many prospective buyers into smaller beach communities or the countryside.

However, statistics showed a favourable outcome for the South African property market and boosted “purchase activity” levels in many large metropolitan suburbs.

Seeff believes these advantageous market conditions result from low-interest rates and advantageous mortgage repayments, which afforded many locations their highest sales targets in the last five years. These locations include Cape Town, Johannesburg, Pretoria and Gqeberha.

Gauteng is known as the financial hub of South Africa, and this comes as no surprise as it is the country’s most affluent province. It also houses Pretoria, the province’s administrative capital and other significant areas, including Vanderbijlpark, Midrand and Sandton.

The best-selling suburbs in Gauteng include:

Protea Glen in Soweto holds the most significant transaction quantities since 2016; these larger transaction volumes come predominantly from young and family buyers and fall between the R400 000 to R1.5 million purchase bracket.

Greenstone Hill in Edenvale is a high demand neighbourhood and experiences regular yearly price increases. Greenstone Hill held its highest number of transactions in over three years; this is not surprising due to its exclusive real estate selection that features sectional and estate property and proximity to the airport for prime transportation.

Randburg is one of the most sought-after cities in the Gauteng province. According to Seeff Randburg licensee Duane Butler, this statement holds firm as the city achieved 6473 transactions in 2021; this equates to over R8.3 billion. These successful transactions resulted from improved mortgage performance, affordability, and an active rental market in the area.

Bryanston in Sandton is an upmarket area where homes sold reached values up to R20 million, affording it a seven-year high in purchase volumes and a total market value of R3 billion, according to Seeff Sandton Managing Director Charles Vining.

Midrand is another large city in the Gauteng province filled with affordable locations that feature many rich amenities near Johannesburg and Pretoria. Waterkloof Ridge is one of these locations; it reached a total transaction value of R1.3 billion alongside a steady year-on-year price increase.

According to Vinning, the Midrand property market is highly sought-after and witnessed R5.3 billion in transactions owing to increased interest from young buyers, who account for over 40% of all buyers across the retail market.

The neighbourhood of Centurion is another best-selling suburb with sought-after properties. According to Seeff Centurion manager Tiaan Pretorius, Centurion reached 6936 successful transactions, equating to approximately R10 billion, the highest recorded figure in over six years. One of the most renowned locations in Centurion is the esteemed Midstream Estate which holds a worth of R2.3 billion. This security estate is a retail paradise that features over 7000 houses, shops, schools and medical facilities and appeals to families seeking a safe and secure lifestyle.

KwaZulu-Natal, also known as KZN, is the “garden province” of South Africa born from merging the Zulu bantustan of KwaZulu and the Natal province in 1994. KZN is the second most populated province in South Africa (behind Johannesburg) and holds the capital of Pietermaritzburg, and Durban, the largest city in the region.

The best-selling suburbs in KwaZulu-Natal include:

Umhlanga Rocks is another best-selling suburb in KZN. According to Seeff Umhlanga Rocks licensee Brett Botsi, the area is undergoing a colossal influx of luxury semigration buyers from other places, affording the branch a beachfront sales target of over R20 million.

Despite the COVID-19 chaos and looting in July, Ballito (also known as the Dolphin Coast) is a popular location that retained normal operations over the last two years.

Due to its many upmarket security estates, Ballito has remained a sought-after city to buy property; two of these estates are the Zimbali and Simbithi, which sold over R1.71 billion properties, with Simbithi prices reaching R22 million.

The Eastern Cape is the second largest province in South Africa (behind the Northern Cape). It houses the capital of Bhisho alongside its two largest cities, Gqeberha and East London. The Eastern Cape includes the southern spur of the renowned Drakensberg mountain range. Although it is a predominantly mountainous country, there are still a few best-selling suburbs with affordable properties available in the province.

The best-selling suburbs in Gqeberha:

Gqeberha is a major seaport and is the economic, financial and cultural centre of the Eastern Cape. As the most populated city in the Eastern Cape, Gqeberha houses South Africa’s second-largest metropolitan district, the Nelson Mandela Bay Metropolitan Municipality.

According to Seeff Port Elizabeth licensee Pierre Germishuys, Gqeberha is the best coastal alternative to the Garden Route and Cape. A total of 5677 transactions occurred in the area, equating to more than R6.1 billion resulting from affordable property prices in the area, especially for the locals. The majority of buyers in the Gqeberha area fall into the 36 - 49 age group; however, 40% of the buyers are under 29

The Western Cape is the most southern province of South Africa, with coasts boarding the Atlantic and Indian oceans. The region houses the port city of Cape Town, which is set beneath the famous Table Mountain and doubles as the country’s legislative capital.

There are many best-selling suburbs in the Western Cape, and all of them achieved transactions worth R1.3 billion; some of these include:

Bishopscourt is a small yet affluent residential suburb in the Southern Suburbs of Cape Town and one of the best-selling suburbs in the Western Cape. The suburb houses 350 houses, with the majority taking up over 4000 square metres (approximately 1 acre) of land and the area is part of the Cape Town Metropolitan Municipality established in 2000.

Bishopscourt recorded its most significant sales in the last five years, with many properties selling for over R20 million rand, making it a highly sought-after neighbourhood for those who can afford it.

Constantia is a wealthy suburb situated in Cape Town and considered one of the most prestigious suburbs in South Africa.

According to the Seeff Southern Suburbs branch, Constantia witnessed a massive incline in purchase activity since the last escalation. All purchases in the area reached just below R2 billion, with most property sales reaching R20 million more.

Camps Bay is another best-selling neighbourhood in the Western Cape. Located on the small bay with which it shares its name on the west coast of the Cape Peninsula, Camps Bay is an affluent and highly sought-after location that is also popular with foreign tourists in the warm summer months.

In the last year’s property boom, Camps Bay recorded transactions over R20 million; according to Seeff Atlantic Seaboard licensee Ross Levin, a massive influx of high-volume sales increased R18.2 million (per Lightstone) for the average selling price in the area.

Located between the Atlantic Ocean and Signal Hill, Sea Point is another wealthy and best-selling neighbourhood in the Western Cape, just a few kilometres away from Cape Town’s Central Business District (CBD).

As the only seaside suburb in Cape Town with robust high-rise development, Sea Point is a highly sought-after neighbourhood to buy a property or invest in second homes and apartments.

The last property boom from 2015 to 2017 caused boosted activity in the Sea Point area, attracting prospective buyers who want an affordable alternative to homes in the Atlantic Seaboard area. According to Levin, almost 30% of buyers in Sea Point are under 35, which speaks volumes about the area’s affordability.

Somerset West is a secluded town in the Western Cape that forms part of the Helderberg region (formerly known as Hottentots Holland).

Somerset West is another best-selling neighbourhood that attracts foreign and semigration buyers owing to its proximity to the Cape Town International Airport and numerous wine estates in the surrounding area.

Bloubergstrand, affectionately known as Blouberg, is another seaside suburb of the City of Cape Town in the Western Cape. The suburb is primarily a residential area and attracts many visitors, many of whom are kitesurfing enthusiasts owing to the area’s status as one of the world’s top kitesurfing destinations. The renowned Robben Island is 6.9 kilometres west of the Bloubergstrand coast.

According to Seeff Blouberg licensee Clinton Martle, the suburb experienced unexpected spikes in purchase activity over the past year; Martle believes it is one of the best places to live. This statement holds firm as the area draws increased attention from local buyers across the country and international buyers worldwide. 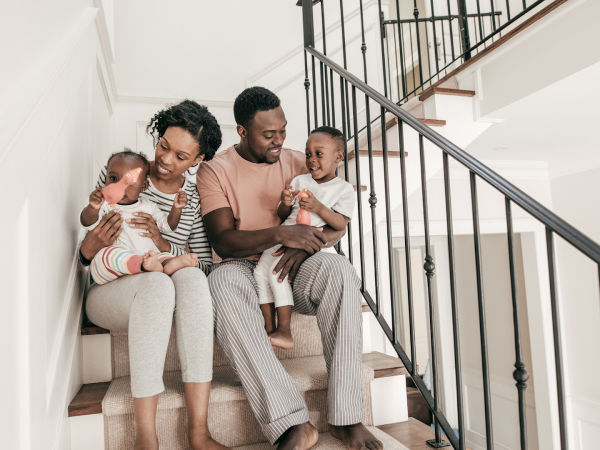 At Seeff, home is our story, and we understand that buying a house at any level is a daunting experience for many. In light of this, we want to guide you along that journey from inception to walking through that front door of your new property for the first time and help you maintain it beyond that.

Before you decide to make your purchase final, we recommend reading our article on what property buyers should look for when buying their first home to ensure you purchase the best possible home for you and your family.