Wouldn't you like to live in a rare historical masterpiece dating back to 1728?

In the heart of Constantia Upper, one such Victorian-styled home has stood the test of time. This beautiful "Bell Ombre" farmhouse contains distinctive character and architectural flair.

The "Belle Ombre" (French name meaning Beautiful Shade) is an 18th-century victorian-style farm and homestead in Constantia Upper, Cape Town. According to Seeff Southern Suburbs Property Practitioner Francois Venter, this luxurious home is one of the most sought-after properties in the Cape.

The 294-year-old corner plot home of 5257sqm consists of dual access into the upmarket pocket of the "The Avenues". The Belle Ombre property dates to the suburb's origins and comes with a rich history. The original farm was given to two brothers in 1728 and included two properties, the Belle Ombre and Goedgeloof.

For over a century, it has been home to many, but by 1872, records show that Johannes Rathfelder (a member of the well-known Ratherfelder family who owned "Rathfelders Inn" in Diep River) bought the property.

The Belle Ombre Offers a Taste of Each Period

The "Great Houses of Constantia" by Philippa Dane and Sydney-Anne Wallace (1981) notes that many changes were made to the property in the late 19th century and later to accommodate the lifestyles of the time.

However, some original characteristics remain, such as the original yellowwood beams and oregon doors.

As an investment property, Venter says it offers exceptional value since it resides in a high-demand neighbourhood. The property still offers authentic architectural detail with many gorgeous, traditional, and classic features such as;

There are multiple living rooms, three bedrooms, an oversized loft room in the main house, and a separate one-bedroomed cottage with a lounge and veranda that overlooks the tennis court.

This remarkable property includes an entire staff accommodation suite, an oversized double tandem garage for four cars and extra storage space. The garden has rolling lawns and two pools, one of which is an eco-pool with an entertainment deck. The property also houses a treehouse for kids, a sunken trampoline and a Wendy House for garden equipment. Additional features include a solar geyser, solar panels with inverters and backup batteries, and top-class security.

The property offers a one-of-a-kind tranquillity in the heart of Cape Town, regarded as one of the neighbourhood's most beautiful cities in the world and one of the most prominent in South Africa. It is particularly desirable for its country-like lifestyle yet with immediate access to the oldest wine farms in the country, top private schools and the University of Cape Town.

The suburb attracts diverse buyers, including emigrants from upcountry areas such as Gauteng and foreign luxury buyers. It has also seen a considerable volume of high-value transactions with about 30 sales above R20 million since the onset of the Covid-pandemic in March 2020, the highest importance in the country equalled only by Camps Bay.

Venter closes by stating that Constantia Upper has not only sustained its property values during the pandemic but remains in high demand as buyers and investors look to get into the market, and now with the "Belle Ombre" property on the market for only R35 million, the area is a ripe choice for valuable property investment. 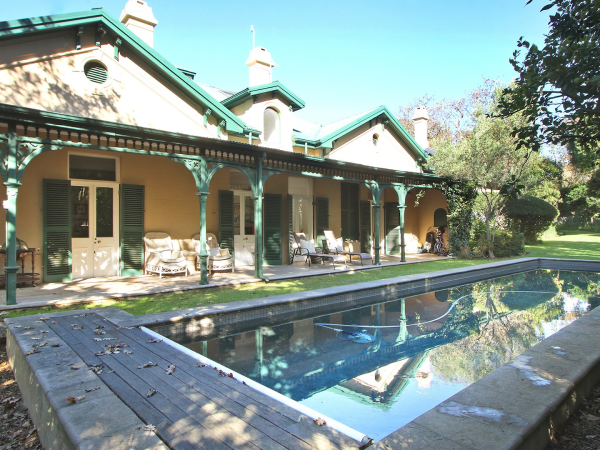 If you are interested in purchasing the Belle Ombre property, feel free to contact one of our capable property practitioners today. If you enjoyed reading this article, perhaps consider reading our article on Winelands “Zoom towns” seeing strong rental demand.